Tunic, headscarf and trousers stained brown by blood on show in Oslo Malala agreed to show them to public as powerful riposte to extremists Education rights activist was 15 when she was shot in Pakistan in 2012 Bullet almost killed her but she recovered and continued campaigning She will become youngest ever Nobel Peace Prize recipient tomorrow

Shot schoolgirl Malala Yousafzai’s blood-spattered school uniform is being displayed for the first time as a startling riposte to extremists around the world.

The glass case has been established at the Nobel Peace Centre in the Norwegian capital Oslo, where the schoolgirl will accept the world’s most famous peace prize tomorrow.

It shows the blue tunic, white headscarf and white trousers, stained brown by dried blood, which the campaigning 15-year-old wore on the day she was shot by the Taliban on her school bus in Pakistan.

Grim memento: The blood-spattered clothes worn by Malala Yousafzai on the day she was shot by the Taliban two years ago has gone on display for the first time in a glass case at the Nobel Peace Centre in Norway

Proud: The schoolgirl (left), now 17, asked specifically for the bloodstained uniform (right) to be included

Now 17, Malala is set to be handed the Nobel Peace Prize jointly with Indian campaigner Kailash Satyarthi, 60, who has fought for 35 years to free thousands of children from virtual slave labour.

The pairing of the two prompted hopes that it would help unite India and Pakistan, who have been in conflict for decades.

But it was Malala who dominated headlines due to her already global profile and her youth – becoming the youngest ever Nobel Laureate.

Already known as an activist and winner of Pakistan’s National Youth Peace Prize, she was on a school bus in October 2012 when it was stopped by a masked Taliban gunman.

He asked for her by name and fired four rounds into Malala and her group of friends, two of whom were also injured. 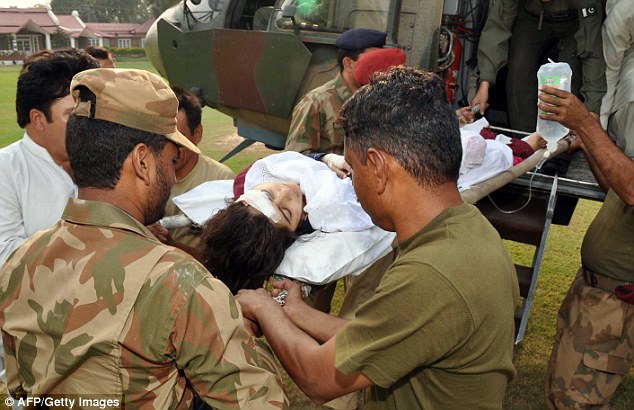 Difference: Aged just 15, an injured Malala is moved to an Army hospital for treatment after the shooting 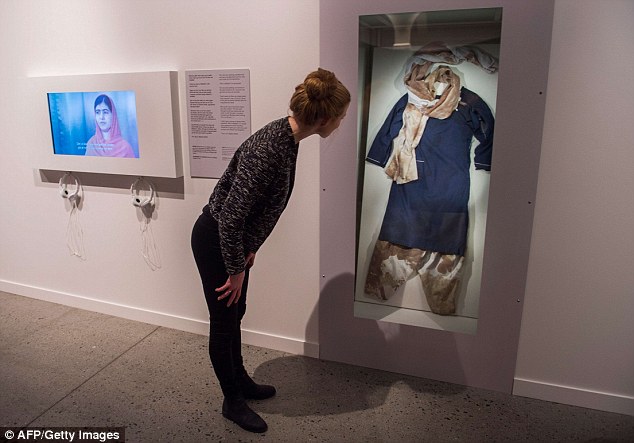 Museum: The uniform is the most high-profile piece in an exhibition about this year’s Nobel laureates in Oslo

The bullet which hit Malala in the head went through her neck and lodged in the muscle above her shoulder blade.

After the shooting she was moved to Birmingham for extensive surgery and, later, to build a new life, where she has continued campaigning for girls’ education.

The exibition will last around two months, after which the uniform will be returned to the schoolgirl’s family.

‘My school uniform is very important to me,’ Malala said. ‘The day I was attacked I was wearing this uniform. I was fighting for my right to go to school.

‘Wearing a uniform made me feel that yes, I am a student. It is an important part of my life.

‘Now I want to show it to children, to people all around the world. This is my right, it is the right of every child, to go to school.’ 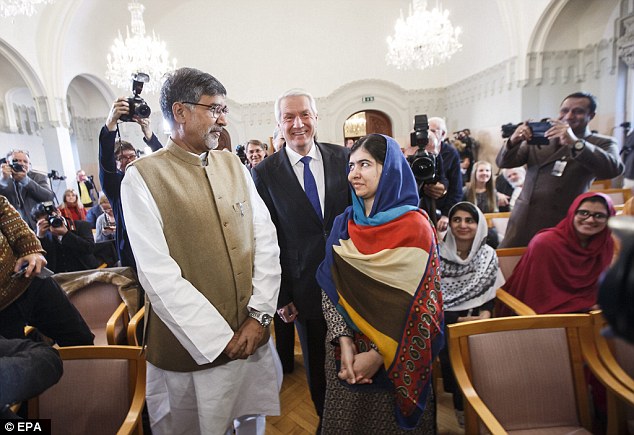 Joint prize: Malala has been awarded the prize alongside campaigner Kailash Satyarthi, 60 (left). He has fought for 35 years to free children from forced labour. He is from India, which has tensions with Pakistan

Bente Erichsen, executive director of the Nobel Peace Centre, added: ‘Malala’s blood-stained uniform is a strong and heartbreaking symbol of the forces many girls are fighting for the right to go to school.

‘The uniform has been kept by the family since the attempted murder in October 2012, and we are grateful that Malala has chosen to show it to the public in our exhibition.’

Malala was honoured by the Nobel committee for the ‘struggle against the suppression of children and young people and for the right of all children to an education’.

She brought the two friends who were injured alongside her to Oslo so they could witness the Peace Prize ceremony.

Shazia Ramazan, now 16, and Kainat Riaz, now 17, hugged their friend and posed for pictures with her today.

The trio told reporters they were bound together in what they called ‘Mission Malala’ – joining with people around the world to make sure young girls have a chance to study.

Both remained in Pakistan immediately after the attack and continued attending school as they recovered, despite being under police guard.

They are now studying at UWC Atlantic College near Cardiff, south Wales, and have said they want to become doctors.

‘The Malala mission is our mission. She’s my friend,’ Riaz said. ‘And she inspired us. Inshallah, we will always support her.’

Malala added: ‘Though I will be one girl receiving this award, I know I am not a lone voice.

‘These courageous girls are not just my friends, they are now my sisters in our campaign for education for every child.’

Reesham spent Thousands amongst the technicians