Melanie Brown – Today by Transsmusic
Melanie Brown, also known as “Mel B,” was previously known as “Scary Spice,” a member of the all-girl, British pop group the Spice Girls.

Melanie Brown was born on May 29, 1975 in Harehills, Leeds, England. In 1994, she became “Scary Spice” in the all-girl, British pop group the Spice Girls. In 1998, Brown released her first single, “I Want You,” with Missy Elliott, which reached No. 1 on the U.K. charts. She has also appeared in theatre productions and feature films, and hosted the Australian version of The X Factor. In 2013, she began appearing as a judge on America’s Got Talent.

Melanie Janine Brown, also known as “Mel B” and “Scary Spice,” was born on May 29, 1975, in Harehills, Leeds, England. She was raised by her English mother, Andrea, and her Nevisian father, Martin, in Burley, Leeds. After studying performing arts at Intake High School in Leeds, Brown went on to become a songwriter, dancer, actress and author.

Brown started her music career after responding to an advertisement in The Stage magazine for an all-female pop act and recording deal. She sang “Greatest Love of All” at her audition and was chosen, along with Geri Halliwell, Victoria Beckham, Emma Bunton and Melanie Chisholm, to become a member of the Spice Girls. The group signed with Virgin Records in September 1995, and released their debut single, “Wannabe,” in 1996, which hit No. 1 in more than 30 countries, and instituted them as a global phenomenon. The song became the biggest-selling single by an all-female group. In November 1996, the Spice Girls released their debut album, Spice in Europe, which was enormously successful.

After drifting apart in the late ’90s to pursue other projects, the Spice Girls reunited for a series of concerts in 2007 and 2008. In June 2012, the group reunited again, this time to announce the creation of a new musical about the rise and fall of the Spice Girls. Viva Forever!, named after the group’s 1998 No. 1 single, is slated to open in London by the end of 2012.

After the Spice Girls broke up in 1998, Brown pursued a solo career. Her first single, “I Want You,” with Missy Elliott sold 80,000 copies in the first week, giving Mel B a solo No. 1 on the U.K. singles chart. Hot, her debut solo album, was released in 2000, and produced three Top 5 singles. Her second album, L.A. State of Mind, was released in 2005, and included the single “Today.” The album was considered a flop.

In 2002, Brown starred on the BBC3 sitcom Burn It, and in 2003, she made her theatre debut with The Vagina Monologues in London. She then went on to star as Mimi in the Broadway musical Rent. Brown has also appeared in feature films such as LD 50 and The Seat Filler, and hosted the television shows This Is My Moment, Top of the Pops, Access Hollywood, Dancing With the Stars and the Australian version of The X Factor.

In 2002, Brown released her autobiography, Catch a Fire, which chronicles her experiences as a Spice Girl and pop star. The book reached No. 7 on book sales charts. She also launched a signature fashion line, Catty Courture, and was contracted to be the face of Ultimo Underwear in the United Kingdom. Additionally, Brown signed a record deal with EMI Music in 2012.

In August 2012, Brown performed along with other members of the Spice Girls at the closing ceremonies of the 2012 Summer Olympic Games, held in London.

In 2013, Brown was announced as the newest judge on America’s Got Talent, joining Howie Mandel, Howard Stern and Heidi Klum on the judges’ panel for season 8 of the series.

Brown gave birth to her first child, daughter Phoenix Chi Gulzar, in 1999. The custody battle was highly publicized, and though Brown won, she paid an alimony settlement of nearly $2 million to her ex-husband, Jimmy Gulzar.

In October 2006, media outlets began reporting that Brown was having a baby with American actor Eddie Murphy. Brown gave birth to daughter Angel Iris Murphy Brown on April 3, 2007, and that June, Eddie Murphy was confirmed as the father through paternity tests. 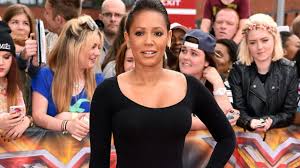